“Breathing in I calm my body. Breathing out I smile.” – These are the lines that I noted down on a colorful piece of paper earlier this month, to keep in mind again. I am smiling quite a bit these days, though: two weeks ago, it was my last chemo session. But the thing with chemo is, it takes a while until the body processed it all, and until side-effects start to fade. There is good news, though: my bloodcount is now rising again towards its former level. Which feels like reaching both a milestone and a turning point.
Below is a (geeky) spreadsheet. The first column is my leukocyte count before chemo: around 8000. Leukocytes are the white blood cells, they are part of the immune system. Their number should be around 4.400 to 11.000. Chemo affects them, and that’s why chemo patients are more vulnerable to infections. During the first phase of chemo, my leukocytes were down to around 2000, and I needed some extra meds to kick it up every now and then. (And yes, each column is a bloodcheck, and each came with that bit of worry of how the count will turn out, especially in the first half)

In the second phase of chemo, my leukocytes were stable at around 4000. Now they are starting to rise… and are at 6300. So I am back in the normal range, and hopefully next week they will return to my pre-chemo-level.

Together with the rising leuko count, I also start to feel better, and can recover. It’s so good to have that pause right now – next week radiation is starting, but I don’t want to focus on that yet, but instead enjoy this time without treatments. Well, or: almost without treatments. There is one date I was really looking forward to, and had scheduled for this week: removing my medical port. It’s that icky round thing you see beneath my skin in the upper chest area:

It’s really a good thing for chemo infusions, as it makes them safer and helps to spread medication. And just in case something goes wrong during treatment, they can directly give other meds, or infusions etc. But it also is just about as comfortable as it looks, at least in my case.
“Deported”
So this week, I had the counterpart ambulant operation to the one in December, when it was inserted. They cut up the scar again, and removed the port. And then asked “Do you want to keep it, or not?” – Curious as I am about all things related to the treatment, and after carrying it underneath my skin for all these months, I surely wanted to keep it and see it. This is how it looks (they cleaned it for me and put it in a neat litte box), and I held it in my hand to take the photo to give an idea of size and proportion. So I am officially “deported” now. 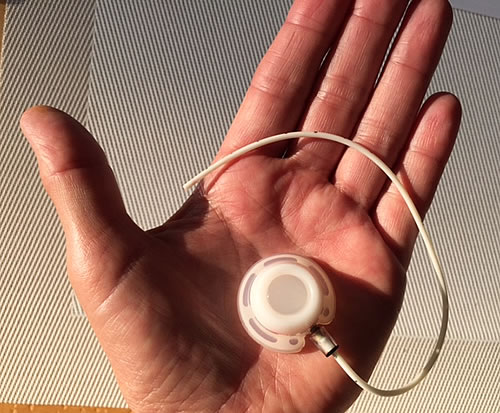 About the port: the lower platform is the part where it gets fixed inside the body at 4 points. The upper part is made out of silicone rubber, that’s where you can insert injection needles, and like skin, the the rubber closes again after the injection. (If you are curious, there is more about ports: basics and details.)
**

While going through chemotherapy, my sleep was different – I hardly remembered any dreams, often it felt like I didn’t really dream much. Medical-sleep, it kind of was. Now that chemo is over, the dreams return. This morning I woke early with the memory of a lovely dream: I was in a festive place, some kind of event in a lush surrounding, with this sensual vibe in the air. There were colorful cocktails, and I was there, feeling good, feeling the breeze in my long hair.
In the dream, I didn’t even know that it could be otherwise.
I fell asleep again, and then had the counterpart dream: I was in a medical centre, the docs and nurses had to do some extra tests, and one of the test came out with a troubling result. Right there, they started to prepare an infusion and gave me a first set of medication. Then they explained: “We are sorry, you have to get 8 more chemo sessions. And we can’t help it, this time, all you will be able to eat is mashed potatoes.”
When I woke, both dream memories were present like films. I guess it doesn’t take a therapist to figure out which hopes and fears, joys and sorrows these two dreams are about. 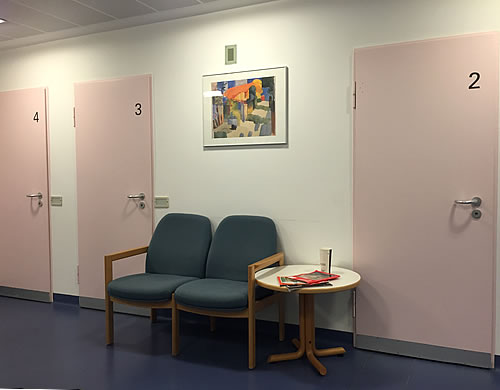 But actually, I had a therapy session last week, an important one that helped me to see things clearer, and it happened at just the right time, too. The thing was, my final chemo was on a Friday, and the following week started with a preparation appointment at the radiation therapy centre, right on Monday morning. On the one hand it was good to get an idea how treatments will continue. But on the other hand, I felt like entangled in treatment dates, without real pause.

So good that just the next day brought a therapy session for me, and through some luck it turned out that I was the only one there, so I had a solo-session with the art therapist, which turned out very insightful. I was a bit early, and she had started to prepare the room, but wasn’t in it – so I finished the preparing, and then started with a first sketch, drawing the answer to the question “how are you?”

It’s somehow a mixed state, chemo finished but the side effects still there, the worry about when they will leave and if they will leave completely, the slight pain in the fingertips and nails… and then the radiation upcoming, and the port removal. I drew a sketch with marker, with the therapy centres as houses/places I have to go through, and the thoughts and worries as bubbles.

Then my art therapist arrived, and we talked – and in the talk, she guided me to another view: that right now I am in between those theraphies. “And what would you need now, what would help your body and your mood?” – the answer was easy: a pause. Healing. Light. Joy. and the thing is, that’s what i had time for at this point: a pause.

She pointed out that I have already included a space between the therapies in the sketch, and suggested to work with that, to open that space and insert the elements that would nourish me now. That’s how the second painting evolved:

And it was so good, to paint it, and creating this space in all those colors. Also, to now have both paintings, and see the symbolism in them, and see how the very same situation can feel like a tense place of worry, or if we are able to relax into the tension, it can be a place of space and ease and creativity. That was so helpful. Of course, I knew this on a rational level, but painting it made it real and touchable on a different level, and let me create that space and mood for me.

The 2 paintings, and their symbolism, they also carry this general truth: that it is up to us whether we fill the space we have with worry, or whether we reach out to the things that help to ease the worries, to nourish us, to arrive at joy and peace, and open space. I think this is true for so many things in life, for all those other times of potential obstacles waiting. It felt like a life lesson, to work through this and put it in the images.

Flashback forward
Upcoming now is radiation with daily sessions. The doc told me that generally, side-effects won’t show much in the first 2-3 weeks, so hopefully I can still recover some more first.
And here’s the blog post from the last chemo: “Final chemo, snapshot of me, and a flashback forward look”. And here’s more about my art therapy sessions, they turned into one of the really good side-effects of this time.
Advertisement

5 thoughts on ““Deported”, chemo dreams, and a life lesson in a bubble”