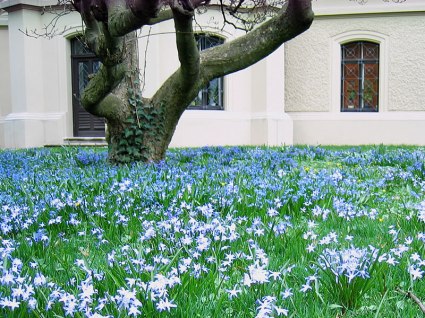 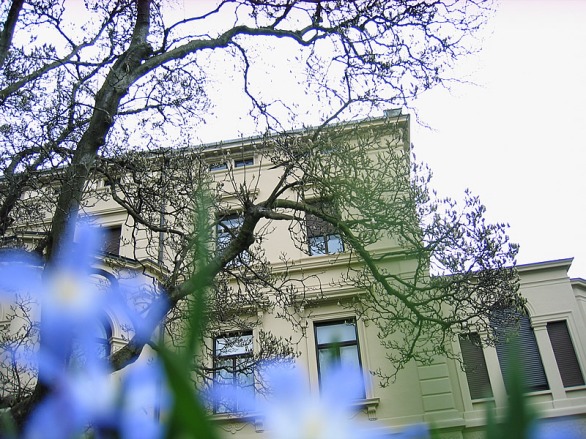 from a visit to an art gallery in 2010 – the theme of the exhibition was “MAN SON 1969. Vom Schrecken der Situation” – “MAN SON 1969. Of the Distress of the Situation”. i first read about it in the saturday newspaper – they had an exhibit photo as illustration, 3 death masks of the RAF terrorists who committed joined suicide in prison in 1976, in Stuttgart.

maybe it was the dark theme that made me notice the surrounding more: the walls, the old tree, but also the new spring flowers.

a note from back then: “while i visited the exhibition, there weren’t many people around (as it was during the week, and in the afternoon). so i came to talk with one of the guides there, and we talked about the RAF time, which she remembers well: she was a young mother back then. “In these years, there were ‘Wanted’ photos up on the door of all post offices,” she said. “And whenever they caught one of terrorists, they crossed the photo out.” We stood in front of a row of photos while talking, and she then pointed at the images, a picture series that shows 2 ordinary persons in a cafe, photographed by a friend. only that the 2 are RAF-members. Wanted.

and weird, isn’t it: the double meaning of “wanted”. there was a sexual factor involved in the RAF group, and also in the Manson family.”